Steven Hetts, MD, is Chief of Interventional Neuroradiology at the UCSF Mission Bay Hospitals, where he provides cutting-edge, minimally invasive endovascular therapy for children and adults with stroke, cerebrovascular disease and tumors, including retinoblastoma. He founded the Interventional Neuroradiology services at San Francisco General Hospital and the San Francisco Veteran’s Administration Hospital, where he served as Chief until 2015. Throughout his career, Dr. Hetts has maintained an active clinical practice at UCSF Parnassus, treating patients with stroke, brain aneurysms, arteriovenous malformations, dural arteriovenous fistulas, spinal vascular malformations, and tumors including meningioma. Dr. Hetts is also the founding Co-Director of the UCSF Hereditary Hemorrhagic Telangiectasia Center of Excellence wherein he and his colleagues provide care for patients with vascular malformations of the brain, severe nosebleeds (epistaxis), and arteriovenous malformations of the lung and other organs. Dr. Hetts received his MD from Harvard Medical School and his undergraduate degree from Harvard College. He completed his medical internship at Stanford and his diagnostic radiology residency, diagnostic neuroradiology fellowship, and interventional neuroradiology fellowship at UCSF, where he joined the faculty in 2008.

As Co-Director of the Interventional Radiology Research Laboratory, Dr. Hetts is involved in translating basic science and engineering research into clinical applicability. The main theme of his research is development of novel image-guided endovascular devices and techniques for the treatment of stroke, tumors, vascular malformations, and other conditions accessible through the blood vessels or skin. He has been the principal investigator on an NIH-sponsored project to develop remote-controlled endovascular catheters for use in interventional MRI. This could revolutionize stroke treatment, allowing doctors to visualize living versus dead brain tissue in real-time during their surgeries. He is also the principal investigator on an NIH-sponsored project to develop an endovascular filtration device to reduce systemic toxicity during intraarterial chemotherapy for a variety of tumors. Such a device could not only reduce the side-effects of chemotherapy, but also enable better tumor control and, in some cases, cure. Dr. Hetts’ research projects have received over $4.5 million in federal and foundation funding and he was appointed chair of an NIH study section evaluating innovative neurological technologies in 2016.

Dr. Hetts has published over 130 peer-reviewed articles and book chapters. He has lectured on interventional neuroradiology clinical practice and research on six continents. With colleagues in the IR Research Lab, Dr. Hetts helped form a startup company, ChemoFilter, to develop endovascular filtration devices. This company was nominated for Medical Device Startup Company of the Year in the First Annual California Quantitative Biology Awards in 2015 and was acquired that year by Penumbra, Inc, an Alameda-based maker of endovascular devices. In 2015, Dr. Hetts was named a Fellow of the Rosenman institute at QB3 and advises other UCSF faculty and affiliates on developing translational research to bring innovative ideas to patient care. 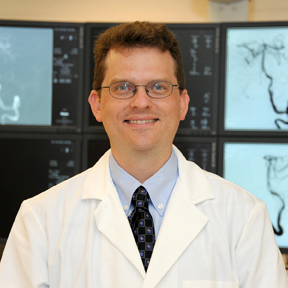