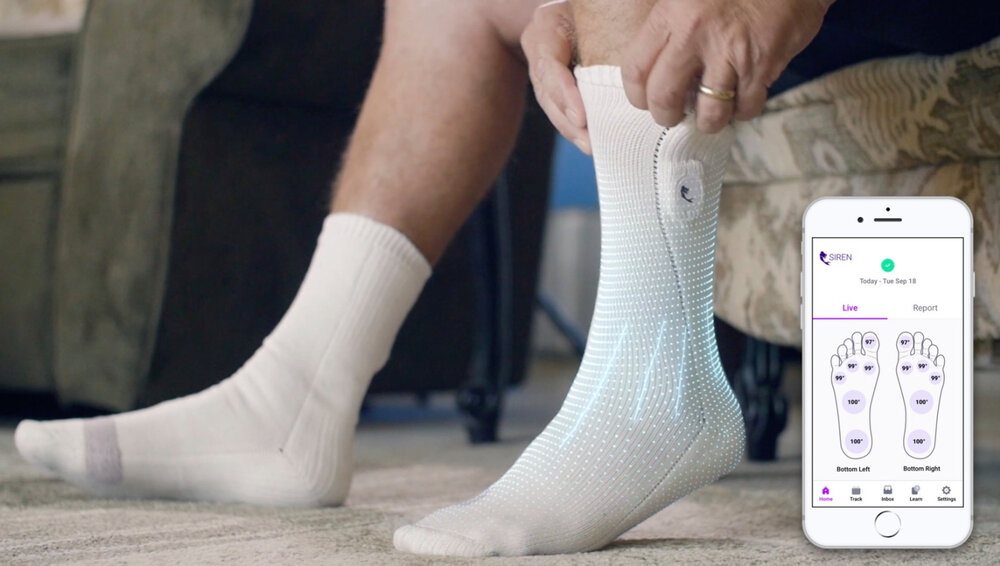 Can a pair of socks help those with diabetes avoid foot amputations?

That’s one of the ideas behind Siren, a company that’s building smart, washable fabric wearables — the first of which is a pair of socks meant to help those with diabetes monitor their foot health and detect dangerous injuries early. They’ve just raised an $11.8 million Series B to help get it done.

The round was led by Anathem Ventures, and backed by Khosla, DCM and Founders Fund. As part of the raise, DCM’s Jason Krikorian (co-founder of Slingbox maker Sling Media) will be joining Siren’s board.

Siren co-founder Ran Ma tells me that amputations in patients with diabetes are largely the result of injuries that go undetected for too long. Over time, diabetes can cause nerve damage; when this nerve damage impacts the feet, patients can develop injuries and ulcers without noticing — out of sight, out of mind. Left untreated, these injuries can grow worse or become infected to the point that amputation is required. Tens of thousands of these amputations occur each year in the U.S. alone.

Siren’s socks help detect injuries that might otherwise go unnoticed by monitoring the temperature of six regions of the wearer’s foot. If one region seems to be getting considerably warmer than those around it, it could indicate ongoing inflammation caused by an injury. The socks can connect to the patient’s phone via Bluetooth to help them keep an eye on their feet — and, importantly, that information is beamed to their doctors, who can keep an eye out for red flags.

That last bit is particularly key right now. With the ongoing COVID-19 pandemic, many are avoiding doctors offices and hospitals in fear of being exposed to the virus; meanwhile, many offices have been limiting their more routine/less urgent or “non-essential” appointments — including, in this case, routine foot exams. Siren’s socks let a patient’s doctors monitor their foot health from afar.

We first met Siren back in 2017 when the company won the TechCrunch Hardware Battlefield at CES. Since then, the company has raised around $22 million in funding; this $11.8 million Series B, a previously undisclosed $6.5 million Series A in 2018 and a $3.4 million seed round.

Ran Ma tells me that they’ve made Siren Socks available in 10 states so far, with plans to expand nationwide by the end of this year.