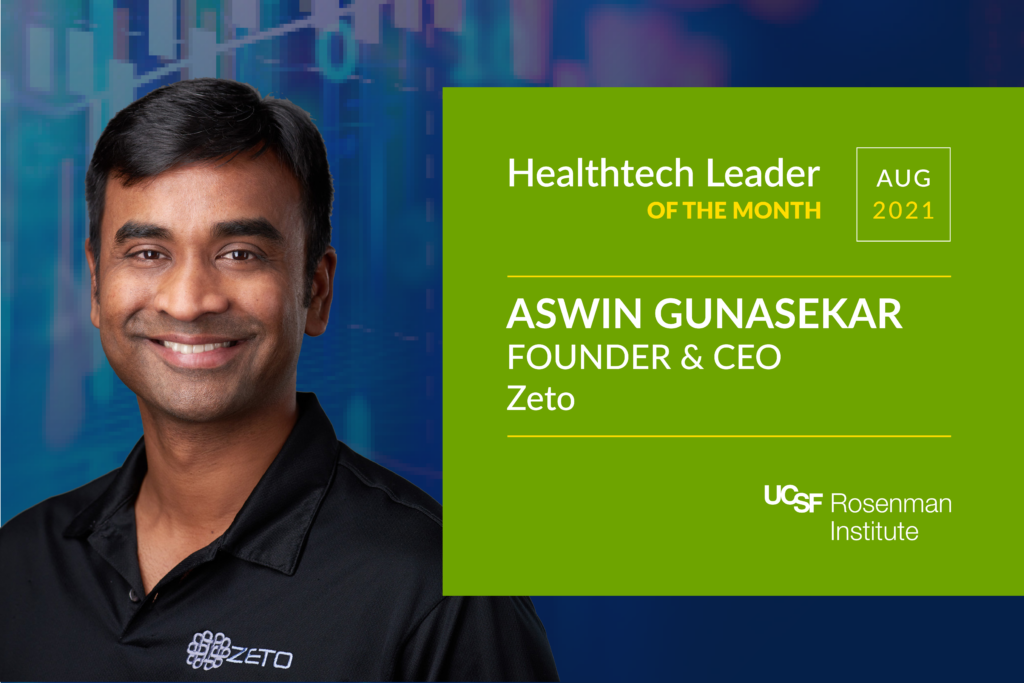 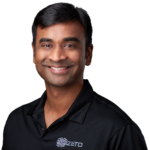 For the August installment of the Healthtech Leader of the Month series, we interviewed Aswin Gunasekar, founder and CEO of Zeto. Zeto is a device-driven platform for acquiring, accessing, and interpreting electroencephalograms (EEGs). An EEG is a test used to evaluate electrical activity in the brain.

Zeto is the first true dry electrode EEG system cleared by the FDA for clinical use. Founder and CEO Aswin Gunasekar breaks down the inefficiencies of traditional EEG.  “If you look at it, the value chain from acquiring the EEG, accessing the data, interpreting the info, and then diagnosing; all these steps were broken,” he says. “The elaborate set up process makes EEG inaccessible. If you need a trained operator, who needs to go through a 10-month certification program just to do this procedure, that’s an instant bottleneck.”

Clinical EEG is arduous: a trained EEG technologist must measure for exact electrode locations, abrade the skin, apply conductive paste, and glue each electrode to the scalp before recording the electrical activity. EEGs are used to diagnose conditions such as brain tumors, inflammation of the brain, seizure disorders including epilepsy, and more.

Check out their website, and listen to Aswin’s episode on the Health Technology Podcast.

When Aswin Gunasekar worked as an electrical engineer at AMD, designing semiconductor chips, he learned to ask himself: how does the piece that you’re working on fit into the bigger puzzle? “I did a lot of statistical analysis on yield of chips,” he says. “You can get lost in the weeds, or you can put the pieces together and say ‘you can design for this.’”

In the capstone class for his MBA at UT Austin, Aswin formed a team that was eager to solve a pressing issue in healthcare. “My cousin’s story came up. My cousin grew up with epilepsy in the 90s. It took a big toll on his mental and social development, because he was being overdosed on anti-epileptic drugs,” Aswin says. “The drugs are very coarse in nature; they’re not that fine-tuned. His development could have been much better had better tools and care existed back then. We started digging deeper and discovered that EEG is the gold standard for diagnosing conditions like seizures and epilepsy. We instantly knew that it shouldn’t be done the way it’s being done right now, by gluing wires onto the scalp.”

Aswin and the team began developing a headset with soft tip electrodes. “For us, conceptually, I knew there was nothing in science that limited us from doing this. But I knew it would be a journey of constant iterative learning,” he says. Here are a few things Aswin has learned on the way.

Lesson #1: Protect your psychology as a leader.

“Your psychology as a leader is 75% of the ball game. It’s about managing your state, not just about positive thinking. If you are locked in on something that you absolutely need to get done, from a destination standpoint, from a vision standpoint, you will find a way. Never go easy on that,” Aswin says. He recalls how difficult it was as a first-time entrepreneur to find Zeto’s first supporters.

In 2016, Aswin pitched at a Shark Tank competition organized by the Epilepsy Foundation of America, demonstrating Zeto’s prototype on the judges. They won both the People’s Choice and Judge’s Choice awards, raising their first check and confirming that they were on the right path. Aswin cites how important that first inflection point was in boosting their confidence. “Without clarity of thought and managing your psychology as a leader, you’re not going to be able to inspire people to join forces with you,” he says.

“Think big but execute in small steps. It’s also self-motivating; you can celebrate those wins and it motivates the people in your team and it’ll motivate more people to come in and join you,” Aswin says. One of his big-picture goals for Zeto is to bring more companies onto their platform and to give valuable information about the brain to clinical providers and neuroscientists. He plans to get there with the same strategy he’s used from the start: take it step by step.

“Plan and execute. Take out the biggest risk first. Always keep chopping away at that,” he says. “It doesn’t matter whether it’s a technical issue, a commercial traction issue, it’s the same thing: take that problem, break it down into pieces, understand the biggest risk within that bucket, and knock that down first. And then move to the next one.”

“The ground floor, especially the first hundred people in a company, are so important to how the company lives, breathes, and develops into an organism of its own,” Aswin says. “I’m personally involved with every little hire; it doesn’t matter whether it’s a consultant, or part-time, or full-time; I’ll be involved with the first three hundred people.” Aswin looks for people who not only have the skillset and experience, but for those who demonstrate the “startup spirit;” the ability to persevere, to get knocked down and get back up. “It’s not just resume. It’s not just their experience and their accomplishments, you also need to hire for grit and tenacity,” he says. “You don’t see that just on the resume. We actively try to unearth that.”

Beyond the Business Books: Final Thoughts

One of the ways that Aswin wants to grow as a CEO is by growing overall as a person. “I’ve always learned the most from unconnected sources. I think I’m past the stage where I just go read business books. Those are good too, but I think the world is a little bit more complex than that,” Aswin says. “If we are taking a product and selling it to a customer, we are selling it to a human being who has their own life going on. How are we presenting our product as they go through their lives? That kind of learning will come from a better understanding of the nuances of the world.”

Zeto’s next goal is to expand its product portfolio and make their cloud infrastructure more capable. “Right now, Zeto is extremely useful for short-term EEG, but brain monitoring is a lot bigger,” Aswin says. “We need to make products that will allow people to be monitored for hours or days on end. There is a real need here, and we’re talking about brain monitoring! Once you give people a better platform, they’re going to do wonderful things with it.”

“QB3’s Startup in a Box program offered all the important pieces: attorneys, orators, all these people that will get you going. It was no-questions-asked, no-return-expected help. And that was kind of beautiful.”