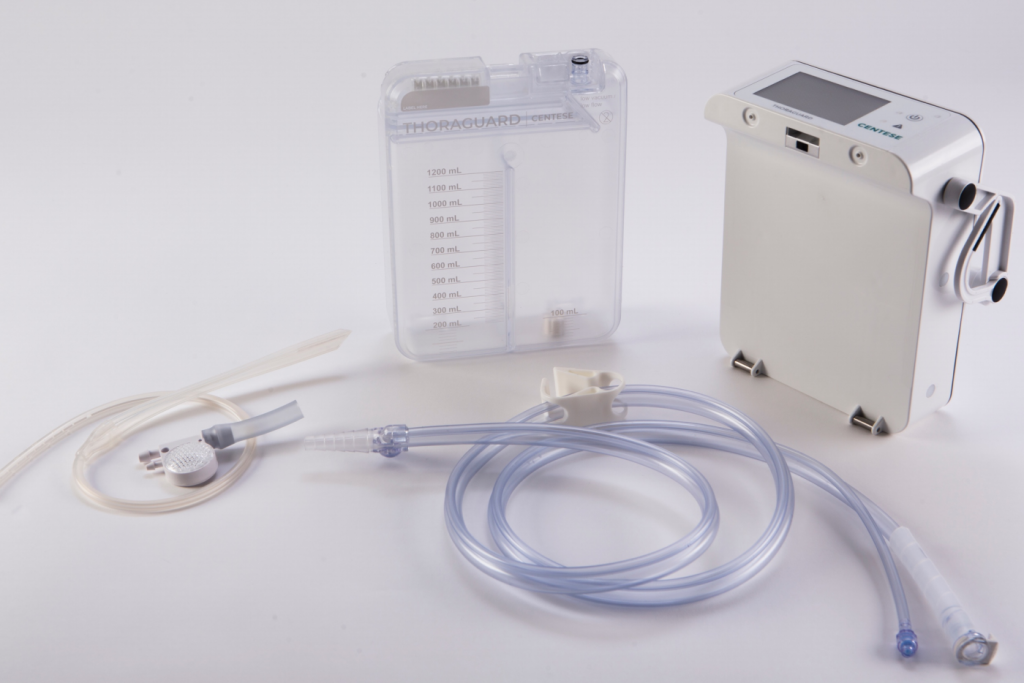 A new Omaha-based medtech company has developed a self-cleaning chest tube system that provides more precise measurements for monitoring patients recovering from surgery on their heart or lungs.

Startup Centese developed the device, called Thoraguard. Through a novel self-irrigating mechanism, Thoraguard eliminates one of the main hazards of analog chest tubes: the need for medical personnel to keep a constant eye out for blockages and other irregularities. The system cleans itself, and its automated self-monitoring capability continuously measures the level of a patient’s post-surgical fluid drainage, sending an alert to medical staff when necessary.

When a patient undergoes surgery in the chest cavity, fluids need to be drained as the patient heals, but the current system is time consuming, cumbersome and often inaccurate, Luxon said.

“The technology that they use right now to do that is just really archaic,” he said. “It hasn’t changed much in 70 years, basically.”

Luxon explained that, under the prevailing regimen of chest drainage, a large, often rigid tube is inserted into a patient’s chest, while on the other end, a canister collects the medical waste via suction provided by the hospital’s wall outlet. In hospitals not using Thoraguard, medical staff must eyeball the level of fluid collected on an ongoing basis, often getting down on their hands and knees to mark measurements in pen directly on the canister—a time-consuming, unsanitary process.

“With our device, it’s a complete transformation of chest drainage,” Luxon said. “It’s a digital system that’s self-contained, and so it doesn’t rely on the hospital’s wall suction, which means that the patients can get up and walk around.”

Thoraguard also self-monitors for leaks in the system and will send an alert to staff if one is detected. This is critical, Luxon said, because a leak could cause air to get trapped in a patient’s chest and possibly lead to a collapsed lung.

“If a patient has a real vigorous air leak, it’s pretty obvious, because it will be bubbling continuously,” Luxon said. “But as patients get toward the end of the recovery, the bubbling tapers off and it can be really hard to tell whether or not there’s still a leak.”

Moreover, the device offsets another common hazard of chest drainage: clogs in the chest tube, which until now had to be manually cleared by nurses. A self-irrigating system allows Thoraguard to automatically keep the line clear and flowing freely. This saves even more time and effort for medical staff.

When Luxon, who had spent several years as an engineer in the Bay Area with medical device incubator TheraNova, first decided he wanted to move back to Nebraska in 2015, he reached out to other members of the medtech industry. He was quickly connected with Unetech’s startup incubator program, a public entity that provides funding and resources for high-risk, high-reward technology through the University of Nebraska Medical Center in partnership with the University of Nebraska at Omaha.

This is not Luxon’s first foray into startup enterprises, but taking on the role of CEO is a new challenge.

“It’s a learning-on-the-job experience for sure, especially for us, now that we are beginning to enter the commercial phase,” he said. “That aspect has been new to me, but I’ve tried to surround myself with other people who can provide supplemental help.”

Luxon has found that starting Centese in Nebraska provides great opportunities for startups in the medical industry.

“It’s a great spot for medical device development,” he said. “It’s great to be in Nebraska where obviously there’s more space (and the) cost of living is lower. I’ve also had really good luck with the talent that I’ve been able to find here. I don’t have any plans to leave.”

Luxon is optimistic for the future of the medtech industry, encouraging those interested to join the field, even if one lacks expertise in medicine.

“I think that’s a great thing about medical devices: It starts with identifying an actual problem and then applying technology to it,” he said. “As long as you have a strong technical background, you can learn the other elements.”