[…] When Jamie Haggard meets me for coffee in between appointments with potential investors, I wonder if he’s forgotten to bring the brace he showed off to me on Zoom. No, he assures me, he’s got it. He unzips his bag and sets it on the table between us. I’m struck by how retro it looks—more like a construction toy than the latest medical engineering.

The Whisper brace is a stack of white plastic hoops, each assembled from small snap-together components. These are clasped around the torso using black fabric straps with buckles. Metal actuators between the hoops hold them apart and parallel; these alternate with flat metal springs. It is, to put it mildly, unassuming. If “WHISPER” weren’t professionally printed on the straps, it might be an especially accomplished high school science project.

But the Erector Set appearance underscores what Haggard says is a key attribute of the design: its modularity. “We can custom-design it for each kid based on these standard parts. And then, as they grow, it just gets a little bit bigger,” he says. By contrast, a child might outgrow a conventional scoliosis brace after a year and need a brand new one.

A former sales executive in the spinal implant industry, Haggard, 49, is the co-founder and chief executive officer of a Fort Collins, Colo., startup called Green Sun Medical. Green Sun has spent the past six years developing the Whisper brace, which it bills on its website as “a revolution in bracing technology.” Wearing the open-frame Whisper, kids can reach down to touch their toes, Green Sun says, and there’s less surface area to chafe or pinch their skin. Air can circulate around the hoops and springs.

The Whisper is so new that only about 40 patients have worn it for any length of time. One of them is Emmie Sweeny. She and her mom signed up in August 2020 for Green Sun’s clinical trial through Shriners Children’s St. Louis hospital. More than a year later, Emmie describes it as “1,000 times better” than her previous braces.

“It was so much more comfortable for her,” Catherine says. “She could tie her shoes. She could be bloated. And she could get her brace off by herself.” Emmie has worn the Whisper exclusively for well over a year, and so far, her mother says, it’s keeping her S-curve in check.

David Skaggs, the director of pediatric orthopedics at Cedars-Sinai Medical Center in Los Angeles, has treated a handful of patients (not including Emmie) with the Whisper as part of the clinical trial. He says they prefer it to a rigid brace.

“These hard braces have probably been around for 100 years,” he says. “What thing in medicine can you think of that hasn’t advanced in 100 years?” Of the Whisper, he says, “I feel more optimistic about this than any conservative treatment of scoliosis that I’ve come across. I want to be very clear, though,” adds Skaggs, who’s an unpaid adviser to Green Sun and has invested about $100,000 in the company. “We have no idea if the brace works or not.”

Green Sun’s co-founder and chief technology officer, Matt Thompson, 49, is the lead designer of the Whisper brace. Before starting the company with Haggard, Thompson worked on medical devices such as the Digit Widget, which treats flexion contractures of the finger. The Digit Widget gradually extends the bent finger while still allowing the patient to move it, a principle that Thompson carried over to the Whisper.

It took hundreds of design revisions before the team could give the Whisper an open structure, Thompson says. Early prototypes had hoops, as the current brace does, but they were sewn into a neoprene vest with springs sticking out of it. “These poor kids looked like TV antennas,” Thompson recalls of the children who agreed to try it on.

Belying its name, the Whisper is actually a bit heavier than a standard brace, at more than 4 pounds. But Thompson and Haggard say for most patients, flexibility and breathability trump the extra weight.

With a $1.2 million grant from the National Science Foundation, Green Sun has started to develop an in-brace sensor system. The sensors will track not only wear time—feeding that data into an app—but also how much force the brace is applying. Haggard compares it to a tire pressure gauge: If the PSI drops too low, you know the tire needs more air.

As your tissues adjust to force, Thompson says, the correction from that force drops off. The challenge is to “keep that force higher for longer, so you can stay in that sweet spot and keep getting that correction.”

Green Sun, which has six full-time employees, has started selling the Whisper in Colorado and California for $12,000. It’s a high price point; braces generally range from about $2,000 to $10,000. For now, families who buy it can file a claim with their insurance and see what happens. Most US insurers cover scoliosis braces, but not every kind of brace, especially if it’s experimental, and not always the full cost.

Getting buy-in from doctors will be crucial to making the Whisper a viable product. When I asked scoliosis specialists what they’d need to start prescribing it, they cited two things: evidence of how straight the brace can hold the spine and a high-quality clinical study showing effectiveness at warding off surgery. Haggard says the Whisper’s in-brace correction matches that of rigid braces so far. (Skaggs says in the small sample he’s seen, it may be slightly lower at the initial X-ray.) But it’s still a long road ahead for mass commercialization. Recruitment for the trial slowed because of the pandemic, and obtaining peer-reviewed evidence that the Whisper works—or doesn’t—will take another year at least.

Some doctors might not wait that long to give the Whisper a try. “I’m happy to prescribe it right now,” Larson tells me over Zoom. “I think the ideal candidate would potentially be someone that had tried this”—she picks up a rigid brace—“and was not able to do it.”

Then there are the patients to win over. Here, the Whisper’s science-fair aesthetics could pose a problem. Luke Stikeleather, an orthotist in Virginia who connected Green Sun with patients earlier in the Whisper’s development, says some thought the brace was cool, but others “struggled with its appearance.” Old-school, rigid braces are smooth, while the Whisper has, in Emmie’s words, “lots of bumps.” Along with the clinical trial, Haggard’s new priority: making the design sleeker. […] 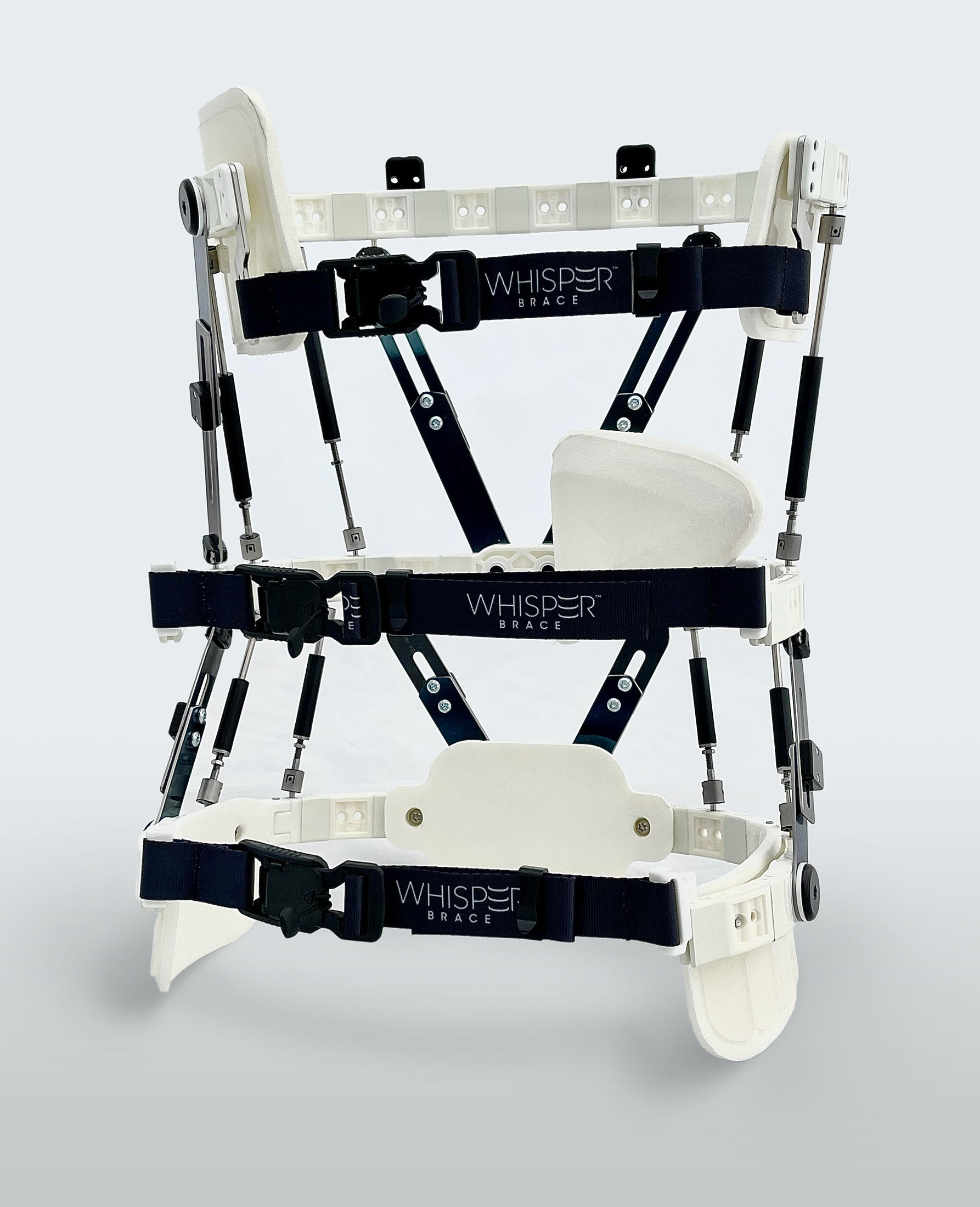